Beginners over-read some bits of advice, and under-read others.  At least that’s my observation from my admittedly smallish beginner sample of one – myself, thirty years ago.  I remember leaving potting mix under plastic in the sun so that I could plant azalea cuttings ‘into warmed soil’.   The reference book that used these very words didn’t tell me that the soil had to be warmed, and stay warmed, for the duration of the several-month rooting process via a heated propagation unit.  I diligently, and uselessly, followed exactly what I was told to do.  On the other hand, when I was firmly instructed against buying pot-bound plants, I blithely dumped that advice into an over-warning file, and bought whatever I damn-well pleased.

And I still make the same mistake.  This is not entirely because I continue to disregard this advice.  It’s largely because when you’re standing in front of a row of plants in a nursery that you either want to buy for yourself, or need to buy for a job, there’s never a choice between pot-bound and un-pot-bound stock.  It’d be nice if they had a clearly marked row of each, but they don’t.  You want/need the plant, and you buy it there and then, unless, perhaps, it’s clearly on its way out.

This I did several months ago, though to be fair to myself, the plants were delivered by the wholesale nursery following a phone order, so I didn’t get the chance to check them out first.  Nor did I realize that we were about to enter a more gruesomely dry spring and summer that any sensitive, caring gardener should ever have to face in this life or the next.  And it’s in those conditions that the old advice really kicks in.

The point is that a plant that has invaded every bit of the available potting mix in its pot with roots is going to dry that soil out much faster than a smaller, younger plant with plenty of root-growth potential left in its pot.  And since nurseries are much more diligent, regular (and probably prodigal) with their watering than I will ever be, a plant which has shown no sign of stress up to the point of planting is likely to show it very quickly afterwards, unless the same amount of water is kept up to it.  Despite what we all think, a plant freshly put in the ground can’t access any more water than it could when it was in the pot – not until the roots start to invade the local soil.

Just check these out.

Firstly there’s a young plant of Aster x frikartii ‘Monch’.  The big shot above shows it in the foreground in full bloom in a client’s garden last summer – it’s the blue daisy thing in the foreground, and in reality, matches the other blue thing that it’s mixed with, despite the lies of the camera. 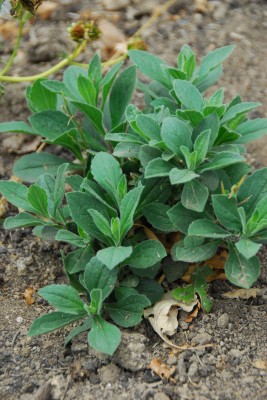 The plants I put in this year were not at all pot-bound, and though they hated the hot, dry spring, given that I could only water them very occassionally (by which I mean probably 4-5 waterings over spring, and not at all since), and were discouraged further by being nibbled by rabbits, they’ve put out a whole lot of fresh, new growth, and have obviously rooted well into my soil.  This is how they looked two days ago, having had no water for a couple of months.  Ideally, they’d be blooming, but at least they’re happy, growing, and full of potential. 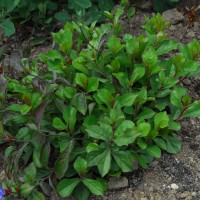 The same is story applies to ceratostigma.  These didn’t like the transplant either.  The existing foliage immediately looked autumnal and stressed, then coloured up again, but was looking pretty beaten around before a great forest of new shoots arose from ground level.

Compare this with Agastache ‘Coronado’ planted at the same time (see pic below).  These were big plants, and looked like great value for money.  But they were pot-bound.  The plants themselves are very drought tolerant, but I just couldn’t keep them from wilting, no matter how often I watered.  As soon as I stopped watering, they curled up, and all but one has died. 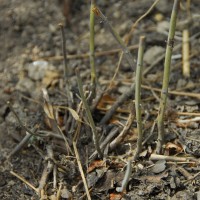 I’m not having a go at the nursery about this.  It’s well-nigh impossible to keep these fast-growing perennials from becoming pot-bound in the nursery, and in most years, it would hardly have mattered.  If I’d known such severe dry weather was coming (and that my teenage daughters showering regime would drain the tank much faster than back in the long-drought years, when they were younger), I would have potted them up, and planted them once their roots had started to colonise the fresh potting mix.  Or I’d have waited until the autumn to buy the plants, and put them in after there was any danger of stress.  By the time the next summer hit, they’d be well integrated into their new homes.

This is how the same plant looked at this time last year, from first year plants that didn’t face any stress, and how I’d hoped they’d look for me about now (Agastache ‘Coronado’ is the orange, tubular-flowered thing at the front). 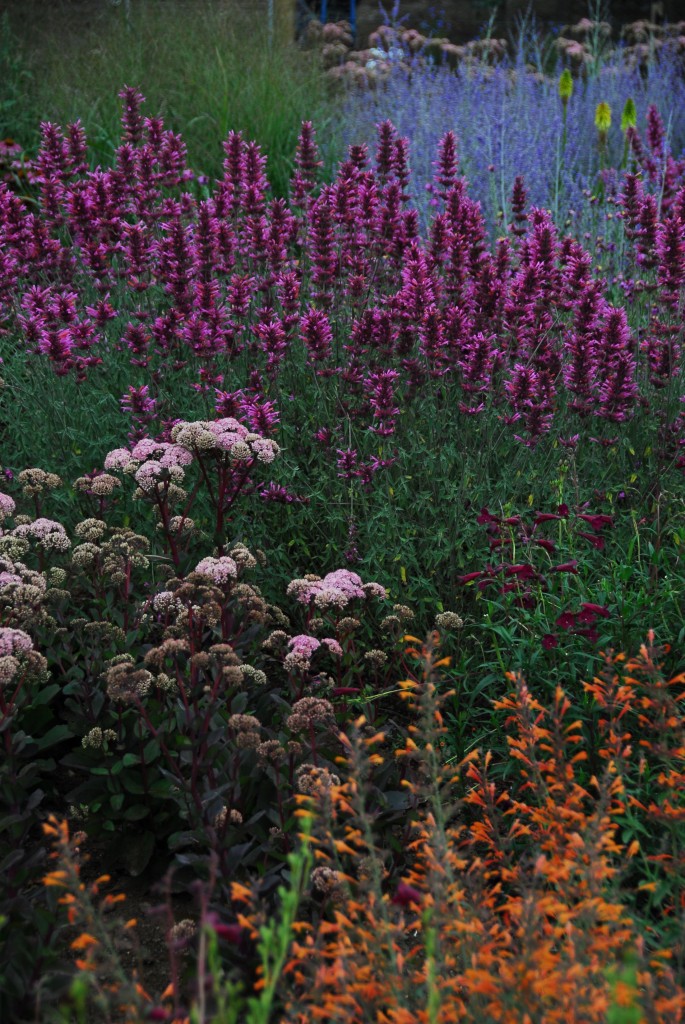 After thirty years, I can state with resigned certainty that that old advice was good advice, after all.

A Pinch of Floral Spice

One of the really big questions is how much garden space should be allocated to good, reliable plant matrix, and how much to seasonal, colourful, ephemeral blast.  It’s sort of the same as when you ...

So I declare, straight up, that PGA (Plant Growers Australia) occasionally gives me plants to try out.  They’ve never asked me to write about them, and I’ve never offered to, let alone promised t ...

Of course it depends on your terms of reference. A year seems incredibly quick to me, to achieve a full and floriferous garden. But I have had people question me on my garden that I created and opened ...