I’m a complete sucker for an annual climber.  This isn’t, like many of my inner horticultural longings, borne out in my actual garden.  But they call to me, nevertheless. One day I swear I’m going to make me a dozen or two of them stick-tripods and grow every last one of them to perfection. 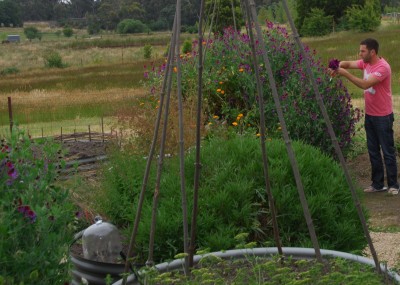 Me, hackin away at sweet peas last Christmas

The only annual climber to be had in flower right now in my frost-plagued climate is the sweet pea.   And given that this frost-plagued climate has moved to a drought-plagued in one apparently effortless step this year, it looks like its flowering is going to be cut short.  I picked something in the region of 500 stems of the purple, scent-drenched ‘Matucana’ for Christmas day last year.  There’ll only be seed pods this year, the way we’re going. 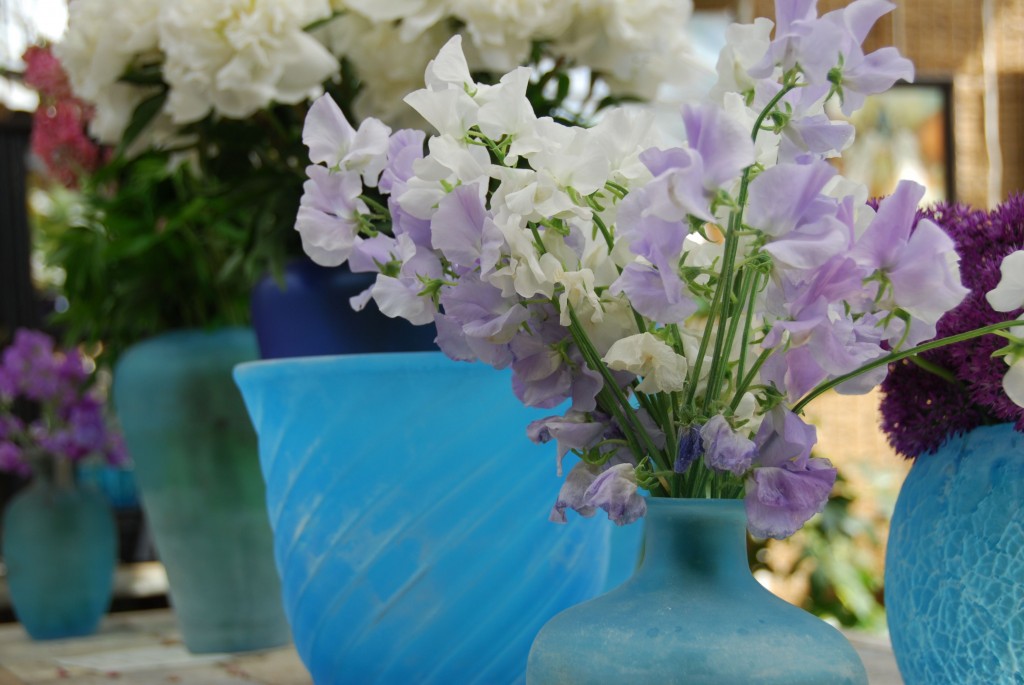 Sweet peas in a display of fabulously expensive glassware at Petersham nursery, just outside of London

Sweet peas are frost-hardy enough to sow in Autumn, growing very slowly in winter, then bulking up rapidly in spring for late spring/early summer flowers.  But most annual climbers are frost tender, so like being planted in spring for summer and autumn flowering. 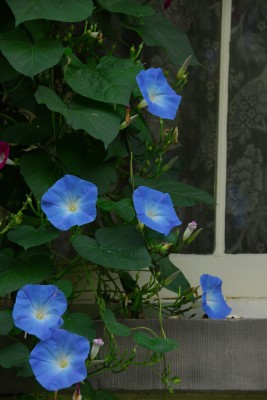 I’ve waxed lyrical about Ipomoea ‘Heavenly Blue’ for too many years in too many places, but have no intention of stopping.  There are few plants that make me ache like this one, and I don’t fully understand why.  There’s their fragility – that always makes for a skipped heartbeat.  And there’s that outrageous, rub-your-eyes-in-disbelief blue. Then there’s the long slender white throat, that isn’t all that evident when you look at the flower straight on, but guarantees that any side-lighting makes the flower look like it’s lit from within.  This plant needs heat.  It barely moves for me before December, and will go with the first frosts in April.  But for just a few glorious weeks… 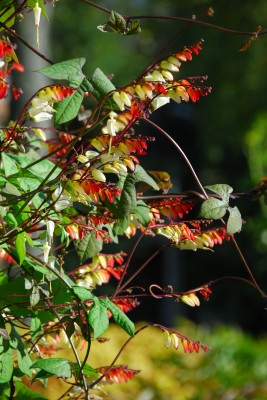 I’ve never yet managed to get a decent show out of its close cousin, once called Mina lobata, now Ipomoea lobata.  I was always skeptical about their close relationship, but now they’re in the same genus there’s no denying it.  It’s another heat lover, and its hard seed seems to me reluctant to germinate.  Invariably, by the time it does so, there’s not enough time left in the season to get any decent size out of it.  In England or North America they’d simply sow it in a glasshouse or indoors, so as to extend the season.  But we Aussie gardeners just don’t.  I just don’t.  It’s stupid, but I just don’t.  I can’t ever get to thinking about germinating tender stuff like this until well into November.  I’ve really got to lift my game.

Possibly the easiest of all annual climbers is the bog-standard running nasturtium.  It’ll run up and over virtually every obstacle in its path.  Most of the named varieties of nasturtium for sale are over-tamed and over-polite, like a sailor-suited Victorian child who’s had all the will beaten out of him.  But you can still get the trailing types – I bought some in Bunnings just the other day. 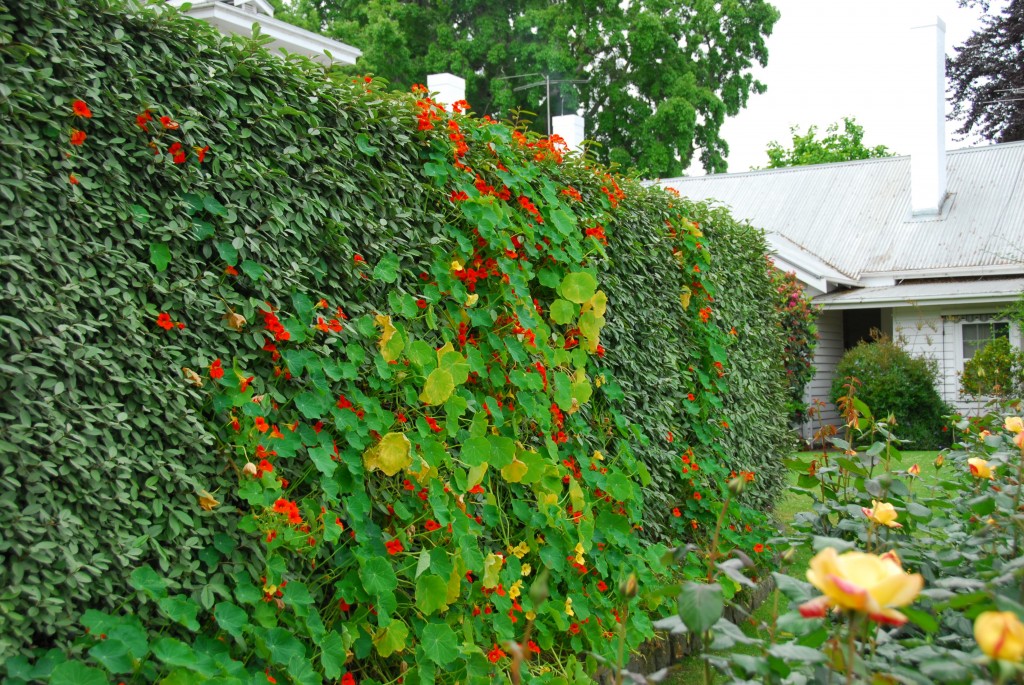 I wish I could still get seed of the nasturtiums altogether more refined relative, the canary creeper (Tropaeolum peregrinum).  The common name is uncommonly accurate in its description, with yellow flowers made up of two widespread wings, just like an alighting canary.  Even the leaves are smart, like lobed waterlilies. I’ve no pics other than on 35mm slide, so can’t add one of my own.  But you can check one out here.

One day I’ll also conquer the challenge of growing Rhodochiton atrosanguineum from seed.  This is a tender perennial climber that, due to frosts here, I have to grow as an annual.  So far I’ve only ever bought young plants.  Even they’re hard enough to find, and I wouldn’t have a clue where to get the seed. Again, my pics are all on 35mm, but you can see one on p169 of The Gardenist.  For that you’ll have to buy a copy.  A cheaper but altogether less satisfactory option would be to click here. 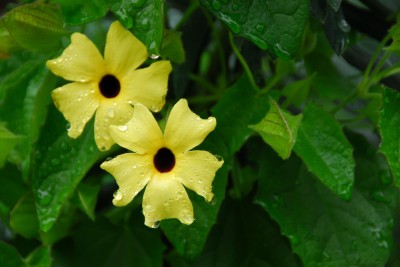 Finally – an annual climber I don’t know that I’ll ever bother with.  My rejection of this is as inexplicable as my love for Ipomoea ‘Heavenly Blue’, but there’s no arguing with it.  My heart’s made up it’s mind, and won’t even enter a discussion.  The mad thing is that I can discuss the merits of Black-eyed Susan (Thunbergia elata) – fast and easy to grow, orange (always a good thing!) or yellow, interesting contrast with the black eye etc etc – but I just can’t love it.  Maybe I’ll grow it one day and see if any magic emerges. 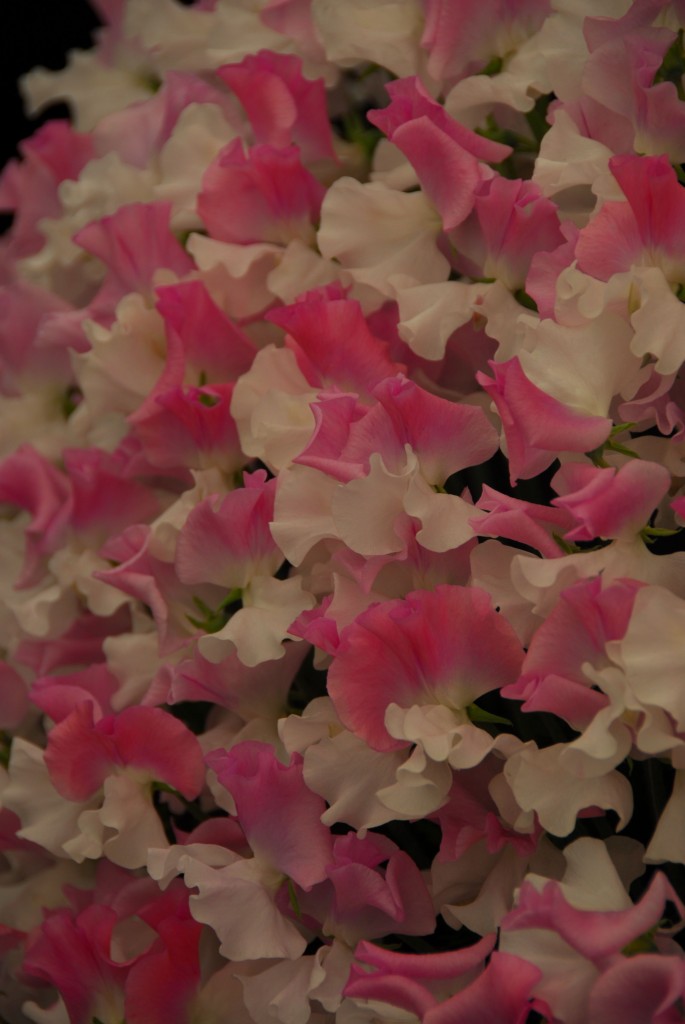 Sweet peas in one of those fabulously 50’s fan-like arrangements that Chelsea Flower Show is yet to grow out of. The exhibitor grows about 2000 plants for every show that she exhibits at. The crazy thing is, you can’t get near them to sniff them. For a couple of years running I requested a sniffing pot – a vase nearer the barricades, for noses alone. The exhibitor just humoured me with a very little, very restrained smile.  This sweet pea, by the way, was called ‘Promise’.  But the exhibitor wasn’t going to promise anything.

If there’s something strange in your garden bed, who ya gonna call? Ghostbusters? Maybe.  Ellen Willmott, however, might be a better answer. Miss Willmott, so the story goes, liked to sprinkle seed ...

PLANT OF THE WEEK #97: Cupressus sempervirens

If only there were more trees with the emphatic verticality of the Italian cypress. But there aren’t.  The Italian cypress (also known as pencil pine) is a stand alone, in every sense.  It stands ...

PLANT OF THE WEEK #95: Cotoneaster horizontalis

OK, I’m a bit nervous about this one.  I guess it comes down to whether Plant of the Week is about raising plant awareness or whether it represents plant promotion. For I want to write about Cotone ...