Skip to content
Blog PLANT OF THE WEEK #24: Phlomis russeliana

PLANT OF THE WEEK #24: Phlomis russeliana 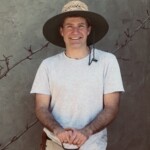 I’ve always been someone who arrives late to a party and I’m rather embarrassed to admit that I’ve only recently discovered how much fun Phlomis russeliana can be, which leaves me wishing I’d arrived at this particular party a lot earlier.

Otherwise known as Turkish Sage, Phlomis russeliana is a member of the mint family and is native to Turkey and Syria, where I have been told you can see it growing wild along roadsides. It forms thick evergreen mounds to around 30 cm high of handsome elongated heart-shaped leaves. The velvety foliage is a beautiful matt green with a greyish underside making it work very well under the Australian light and enabling it to happily blend within a more Mediterranean palette. Foliage and form: massive tick.

The party gets going in spring when it begins to send up sturdy stems to around 100cm high that by late spring have unfurled beautiful whorls of soft yellow flowers at intervals along its length. For some reason they remind me of Lando Calrissian’s cloud city in ‘The Empire Strikes Back’. They have a beautiful floating quality creating an airy mood, and it’s a delight to watch the bees hover in and out. I love how they give my perennial garden some good early season height, well before the Miscanthus and tall prairie plants have even left the blocks. Flower and mood: tick, tick.

As the party moves toward the end of summer, the flowers fade and the stems and flower heads brown off. Now I’m sure we all freely admit that none of us are perfect and I’m sorry to say that neither is Phlomis russeliana. I find this part of the season the only disappointment as unlike some earlier flowering perennials such as Salvia nemorosa, deadheading to encourage a second flush doesn’t work. So in a perennial-heavy planting, you are left with the situation of your early flowering perennials looking refreshed with their second (or third) flowering, and you have your late season perennials like your asters, sedums, Sanguisorba and Miscanthus reaching their peak. The next step is up to you. You can dead head the Phlomis and be left with just the fresh foliage and a fresh looking perennial-party for beautiful people only or… you can leave it be and be rewarded down the track. My advice is to leave it be (Disclaimer: For some reason I’ve never been allowed entry to a party for just beautiful people so I really wouldn’t know what that’s like).

So, now we get to the really good bit, which is when the autumn decay of other perennials kicks in and we head into winter, the flowering stems of Phlomis russeliana are a dramatic deep chocolate brown, turning almost black when wet with mist and rain. The sturdy stems are impervious to the strongest wind and remain all winter long. The strong shape and colour bounce superbly off a background of bleached swaying Miscanthus, the dark brown flower heads continuing to lend an airiness but this time with added drama and contrast. For me the favourite time of the year is when autumn tips into winter, and I think this is where Phlomis russeliana becomes the life of the party, keeping it going well into the night.

And even though it may be a little while off yet, aren’t we all looking forward to a good long party! 😊

It’s the weirdest thing.  You grow vegetables in order to eat them, right?  How is it, then, that when the time comes to pick, the knife can hover over them, poised for the kill, but waver in vaci ...

Firewood is now such a frightful price that you feel compelled to maximize the layers of pleasure it can provide.  The provision of warmth alone isn’t enough. As it happens, I like the way it smell ...

Music to my ears

How sweet are these words, at the end of a long article by one C. E. Baines. More succinctly (and with more humour, and humanity) than any other piece of writing that I know, these casual words acknow ...