Skip to content
Blog PLANT OF THE WEEK #87: Lagerstroemia 'Natchez'

PLANT OF THE WEEK #87: Lagerstroemia 'Natchez' 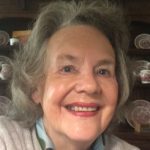 It’s a magic moment every year when my crepe myrtle, Lagerstroemia ‘Natchez’, starts flowering. It’s specially magical because the blossom is scented. I had no idea that there was such a thing as a scented crepe myrtle and it’s always a thrill to discover a new aroma in the garden.

I admired ‘Natchez’ flowering in a local nursery three years ago and bought one to plant that winter. I liked its shape – broadly horizontal rather than vase-like -– as well as the eye-catching contrast of sparkly white flowers among fresh green foliage.

My new acquisition burst into bloom the following January (2020), lightening up the garden in the middle of that horrible, dry, sweltering, smoke-filled summer, and I couldn’t believe my luck when I realised one evening that the flowers were fragrant.

It was a light, sweet scent but quite penetrating so took me only a few minutes to track down. It was such a gorgeous surprise and I’ve loved ‘Natchez’ ever since.

Most crepe myrtles offered here are forms of L. indica from India and China which is scentless. ‘Natchez’ however is a cross between L. indica and Japanese L. fauriei which has fragrant blossom.  It is a medium tree (8 x 6 metres high and wide) with glossy leaves that turn yellow and red when frosty autumn comes. Its greyish bark peels to reddish brown and is highly ornamental in winter.

The individual flowers resemble those of the myrtle (Myrtus communis) with similarly prominent stamens but with crinkly petals like crepe paper, hence the popular name. In China L. indica is called the Tree of One Hundred days, a reference to its long flowering time. The Chinese much admire the bark and are fond of training a tree against a wall to emphasize its beauty.

‘Natchez’ is one of a group of mildew resistant hybrids developed by the National Arboretum in Washington, D.C., each named after a Native American tribe. They are sold here under the slightly ambiguous name ‘Indian Summer’.

The genus Lagerstroemia was named for the Swedish naturalist Magnus von Lagerstrom (1696-1759), a member of the Swedish East India company. Although he never travelled to Asia, he received many plants from India and China which he sent to Linnaeus, who named Lagerstroemia indica L. to honour his friend.

Numerous cultivars of L. indica and L. fauriei are available with mauve, purple, rose and white blossom, from small shrubs to medium size trees, upright to broadly spreading, all with exfoliating bark and most with splendid autumn colour. There’s a group of purple leaf forms called ‘Diamonds in the Dark’ but I had no luck with mine, I think it needed more water than my Mediterranean climate could offer (Bathurst, NSW).

This summer has been unusually damp and mild with cold nights and crepe myrtles in general have not flowered well. Only ‘Natchez’ has been outstanding, so it seems to be the most adaptable to a variety of conditions.

My one problem is that I placed it too far from our outdoor eating area to enjoy the scent. So now I have an excuse to plant a couple more!

Fiona Ogilvie has been writing about gardens and gardening since early 1980s. She has written the weekly gardening column In Fiona’s Garden for The Land since 1995, visit www.theland.com.au

Fiona also worked as a tour leader for Sydney-based travel company Renaissance Tours, taking garden tours to Europe, Asia, New Zealand and Australia. She and her husband Bill live and garden on their farm near Bathurst, NSW.

PLANT OF THE WEEK #69: Viola odorata

Back when I was living with the family in Northern Ireland (as you do, for twelve months, when you just feel like your life needs a bit of adventure), we discovered some lollies named ‘Parma violets ...

PLANT OF THE WEEK #18: Clematis napaulensis

For years I’ve complained that June is by far the most boring month in my garden, and that nothing – absolutely nothing – actually looks like it’s enjoying June by starting to flower in this b ...

'The Gardenist' - the book! Now in stores!

Check that video link on the right – called (helpfully) ‘The Gardenist Video’.  It’s a YouTube clip made by the publishers for booksellers, but it’ll tell you a bit about it. There’s a ne ...