We’ve all got ‘em – those books that have changed or framed our lives.  In this case I’m sticking to the horticultural, or those that have fed into that part of my life

These aren’t necessarily my favourite garden books.  They’re the ones that have been the most influential over the direction that my gardening life has taken, and one isn’t a garden book at all. 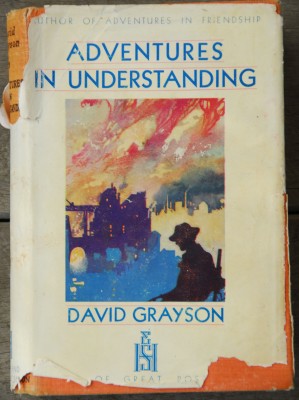 Gotta start with this.  It’s to blame for nearly everything that I’ve pursued since it literally fell into my hands while I was precariously balancing a box of old books, while simultaneously rummaging through it, in my Mum’s garage about thirty years back.  It grabbed me from the first word – intensely first person, intensely personal.

It has framed my outlook on gardening, and just about everything else, since.  There was a slight hiccup when, after the arrival of the internet, I was able to find out what the writer’s own father never did – that David Grayson was the fictitious creation of journalist Ray Stannard Baker.

In the early days of my infatuation when I didn’t know how to find out what other books David Grayson had written, I stumbled on a quote from Adventure in Understanding in an article about that largely unsung hero of Australian garden writing, Jean Galbraith.  There was a seat in the Galbraith garden (‘Dunedin’, in Tyers, Victoria) inscribed with this German quote, which translated to ‘If you were quiet, so would help come’.  I wrote to her, asking if the quote had come from David Grayson.  She replied (can’t describe how excited I was – a real writer, writing to me!) that it had come from Adventures in Understanding, and that DG was a household name for her family back in the 20’s, and gave me all the other titles.  As it turns out, Adventure in Understanding is probably the least relevant of DG’s titles to my subsequent life-style coices, being mostly about his experiences in the city.  Adventures in Contentment and The Countryman’s Year have a lot more to say about the quiet joys of gardening and farming, but A in U was the first I saw, so it counts as the most influential.  That process of tracking down David Grayson lead me to reading Jean Galbraith’s

Garden in a Valley – Jean Galbraith 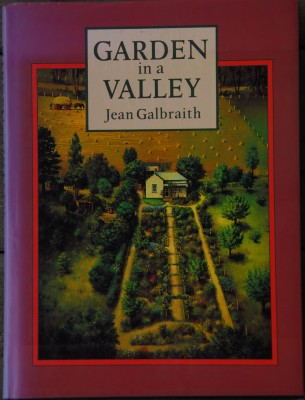 A really lovely read, from the late 30’s.  Miss Galbraith (as she insisted I call her) wrote from the 30’s through until the 90’s.  Incredible.  I assume that many readers would find much of this book too sentimental, but I’ve never had great sentimentality receptors.  I don’t know that I’ve ever really nailed the meaning of the term.

The last chapter is one of the richest bits of garden writing I know, resonating so deeply with all the reasons why I garden.

The copy I had (the 1985 hard-cover reprint) – was given me (along with a chair, a Manet print and a first edition Edna Walling – all of which I still have) by an absurdly generous next-door neighbor when I was renting in town during my apprenticeship.  I’ve since tracked down a first edition Garden in a Valley, in it’s floppy 1939 cover. But the book itself wasn’t as pivotal to me as the fact that I started to correspond with Miss Galbraith at a time when I was ready to give the whole professional gardening thing away.  I didn’t have any enthusiastic friends, and there was little enthusiasm amongst the professionals I knew.

Jean Galbraith put me in contact with some of her correspondents in Melbourne, whom I visited, and that managed to just keep me going.  I’m still not sure whether to blame her or thank her.  Mostly I choose the latter. 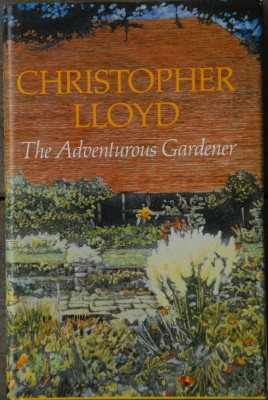 A colleague (who was volunteering in the garden where I was doing my apprenticeship – and was as enthusiastic as you imagine you’d have to be to volunteer) handed me a couple of books, thinking I might be interested.  I kept them for a polite length of time, then the night before handing them back, thought I’d better take a brief look at them so I could make a knowing remark upon their return and distract from the fact that I hadn’t read them.

I’d found my guru.  Over the next few years I read everything of CL’s that I could get my hands on.  Eventually I met him.  What a moment!  Then I fell into correspondence with him.  And then, after a year or so, got to live and garden with him over an English summer – a privilege beyond my deserving, and beyond my craziest dreams.

So what are the most influential books in your horticultural walk?

Thirty years to the day

It’s thirty years today since I was first published, in The Age, Melbourne.  It felt totally tectonic.  I was convinced that my life would never be the same from that moment on.  And it turns out ...

I’m in search of the perfect companion for my colchicums.  They’ve been in flower since the last week of Feb and are looking distinctly lonely (image above). The trouble is, they flower without a ...

One of Many Moments

It’s a big moment for me:  the moment of the flowering of Tulipa batalinii. I guess it could be any species tulip really – they all thrill me – though this one does have something of a story fo ...